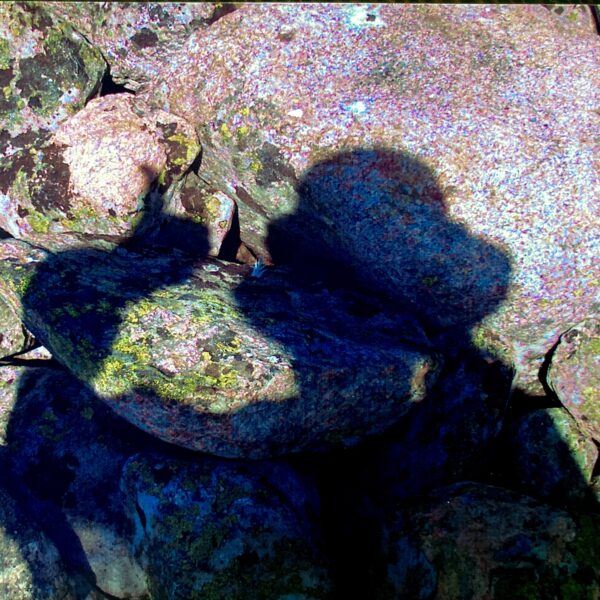 Crackling fire, white sky, the lake is like a mirror, reflecting upward, silent and calm. I can’t rightly pinpoint when this idea popped into my head, yet I can remember the feeling. I think it was on an exploration up north in my float plane, among the tundra and endless slate. That’s when I came upon an old abandoned cache site. It was a strange hole in the earth, like I had never seen before. Not obvious at first glance, someone had built a small cavern to store something… food, tools, supplies? My curiosity ran wild, imagining all the possibilities of how ancient that particular place might be — what it held, and who built it? How incredible it was just to stumble upon it in that vast wilderness, especially with no other signs of life around for hundreds of miles. It felt like a very special moment.

The hole was roughly five feet wide, three feet deep, all dug down from removing rock and slate. It’s not the earth we’re used to south of 60. A secret place, perhaps stumbled upon for the very first time. Maybe I’ll stash a time capsule of all my journals! Some mysterious place, like a treasure. I’ll write down the co-ordinates, or should I leave it for someone to find, to be lost forever, or found by chance?

What am I going to do with all my journals, my life history? I’ve always wondered where my journals would end up after I’m gone. I’ve thought of leaving them in my will, along with a set amount of money, but to who? Would they write a book about my life? Would it be a best seller? Some one brought it to my attention that I should write my own story. Skepticism and doubt runs through my mind. Thirty years of telling myself it can’t be done, living in fear of what others would think. God only knows why I’ve always been more concerned about what others think of me, rarely considering what I think of myself. Finally something has shifted, as though I’ve walked through a door to a whole new realm. I guess my underlying conscience just got tired of being unhappy.

Being childless has always bothered me in some deep seeded way. Getting over the fact that I’ll never have children of my own is tough. In my younger years it consumed me. With age I’ve found more acceptance. Crying over that fact with my parents one day, my dad told me to make my career of flying my baby. It was a great distraction, and that’s what I set out to do. I put all my time, money, love, blood, sweat and tears into achieving that goal. That led me to a successful career of becoming a charter pilot, a medivac pilot, a flight instructor and eventually owning my own float plane.

Through a series of unfortunate events, I found myself locked in a psych ward. I was hell-bent on getting out of there before Transport Canada could find out, but it wasn’t long before they were notified. Soon afterwards, I lost my medical and all my licenses that I had worked so hard for. My license number was 423729 SMELS – Single/Multi Engine Land and Sea, with a class 3 instructor rating. The incomprehensible demoralization — grief, shame, absolute defeat and shock — of losing my career of 20 years overtook me with such force, it dropped me to my knees and I wept like a mother who had just lost her only child.

When my psychiatrist broke the news to me in that ward, my entire world was shattered. Everything I had sacrificed was lost in a few short days. I’ve never fully recovered from that loss, yet over the past few years I’ve worked harder than I ever have to be able to stand on my own two feet again. I’ve had to go back to my past, uproot the traumas, get sober and go to treatment. I’ve had to play the mental illness medication game, talk with trauma counsellors, work with psychiatrists and learn to live a completely different life style. Only after I lost everything did I become willing enough to do anything I could to gain my sanity back.

One Flew Over the Coo Coo’s Nest doesn’t have anything like the stories I have in my 39 days on that psych ward! I couldn’t make that shit up if I tried. Reality is much more frightening than the movies. I was locked in there with some very scary individuals: lost, sick, mean, weird and clinically insane. I kept telling the nurses, “I know you must hear this all the time, but I don’t belong in here.” More stories for another time.

Recovery has been my full-time job. Just staying sober is everyday work. Add on dealing with multiple emotional and mental disorders, some days I barely get by. I also struggle with moderation and balance, battle with finding happiness, peace of mind, serenity and some version of sanity.

I have accumulated these journals over the past thirty years, recording every event. Rather than hiding them in a box underneath the arctic tundra in the middle of absolutely no where, or leaving them to someone else to write my story, I’m going to take a huge leap of faith and write this damn book once and for all! If it’s stories you want, you’ve found the right place — my life is one story after another. If I go about it with half the effort I did when I was flying, it will bring the same satisfaction I felt every time I crawled into that cockpit. With that kind of passion the possibilities are limitless.

Back when I was teaching my students all about aviation and how to fly an airplane, I would always tell them that with your license, hypothetically you’ll also receive a small pouch of luck. No matter how good you think you are or actually are, shit is going to go wrong at some point down your path. Despite you best planning, mother nature can be one bad bitch! You’ll gain a whole new appreciation for Murphy’s law, “what can go wrong, will go wrong.” Don’t use your luck all at once. Only take a tiny amount, because the luck in that bag isn’t limitless. It can get you out of situations despite your best training, and that just might save your life. I know, because I’ve made it out of situations I might not have otherwise.

My career ended before my little pouch of luck ran out, even though I used over half of it in my 20 years of flying. I’ve heard first hand stories from my students in which that luck has saved their lives. With it has come more humility and understanding of what I explained to them. That’s the thing about experience — it’s one of the greatest teachers of all.

I set that bag aside when I lost my flying career. It’s been sitting on a shelf for the past four years, drawstrings tied tight, nearly forgotten up to now. I think it’s finally time to dust that little velvet bag off, take stock of what’s left and use it to help me write a book about my life. I’ll keep the last little bit I have for the end of my days in case I need it for St. Peter.