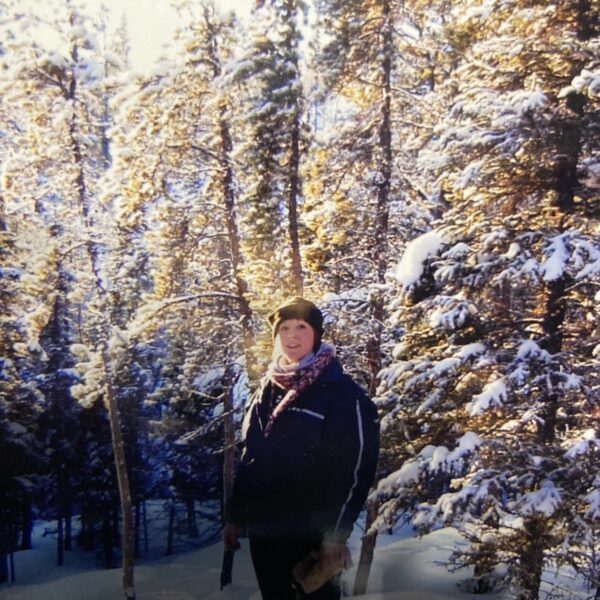 A few days into the new year and we find ourselves in a deep freeze! It’s been hovering around -30°C for the last three weeks and plenty of snow to go along with the cold. Too cold to go outside today — frostbite and the potential for hypothermia keeps me indoors close to the furnace in flannel and warm socks. Observing the outdoors through my window – the forecast reports -47°C this morning, and at these temperatures, everything looks so beautiful. White pristine snow, tree branches hanging low, and somehow the small birds are out pecking at the feeder. How they survive in this temperature is beyond me!

The outdoors inspire me, and I’m usually in the elements when I write, although at -47°C I surrender. In life, surrendering was never an option, doing whatever it took. Perhaps that’s what kept me alive at times, yet what I’ve learned in these last four and a half years in there is victory in surrender. At the beginning it seemed impossible to get my head wrapped around that notion. How could surrender ever bring victory? I worked too hard for my pain and misery to ever give it up.

Surrender meant defeat, defeat meant losing everything. I clung to every bad experience as though it defined me, and I believed that without that trauma I’d be nothing but an empty hole.

In June of 2017 I reluctantly rose the white flag. Locked in 5 South, a psychiatric ward, I was left with no other option; still I had no intention of giving up, it was just a matter of who would outlast who. They kept me in there for 39 days, and 42 days of treatment would soon follow. During an additional 90 days of intense therapy, I had taken that flag down and raised it so many times it became nothing but a tattered rag. That flag pole and I became all too familiar with each other. It felt like I was at war with everyone around me, when in reality I was actually at war with myself.

With my back up against that pole I sat with a dirty old worn out white flag in my hands, and knew I had to find another way. I had to re-evaluate my tactics, change my approach… those one hundred and seventy days had taken most of my resistance away. I gathered up what little I had left and continued on the path to recovery. That path lead to some epic failures and monumental achievements. Along my journey, I found many useful tools that would help me in the coming years. I passed many travellers who passed on great words of wisdom as well.

I never gave up that old white flag and kept it in my pocket as a reminder of some lesson I still had to learn. A few more years would pass and a thousand more tears would fall before I stumbled upon another flag pole. At the top of that bright shiny pole flew a beautiful big white flag — stitched on it was the word “Surrender” — and I knew I had reached the point of no return. At this point the path got wider, it looked more groomed and easier to travel, but past this point I had to completely surrender or head back the way I came and there was no way in hell I was doing that!

Once again I found myself sitting with my back up against that flag pole seriously thinking what had to be done. I reached down into my pocket and took out that old white flag I’d been carrying around for years and thought it’s now or never. So I climbed to my feet, threw that flag to the ground, left it where it laid and surrendered it all. I took up my belongings, made a few baby steps forward and looked back up to see the word “Victory” written on the other side of that flying flag.

Everyday I trudge this road of recovery I surrender my stubbornness, my past, my anger, my need to be right and self-will. If I’m to remain victorious I must give up my need to control everything around me and allow God to lead my way. Surrendering doesn’t have to be done all at once; I find it more of a process. It’s giving up a little bit everyday, giving up old beliefs and old ideas and replacing them with new healthy habits. Surrendering can be frightening, but a wise traveller once told me that there is nothing to fear but fear itself and by pushing through that fear you’ll find victory on the other side.

That old white tattered flag I carried around in my pocket for so long taught me one of the greatest lessons of all. That there is no shame in surrendering, no room for guilt, no space for pain or contempt, that the most wonderful thing you can do for yourself is surrender, and by surrendering you’ll find happiness, forgiveness and peace. Fly your white flag to a freedom you’ve never known before — there is Victory in Surrender.