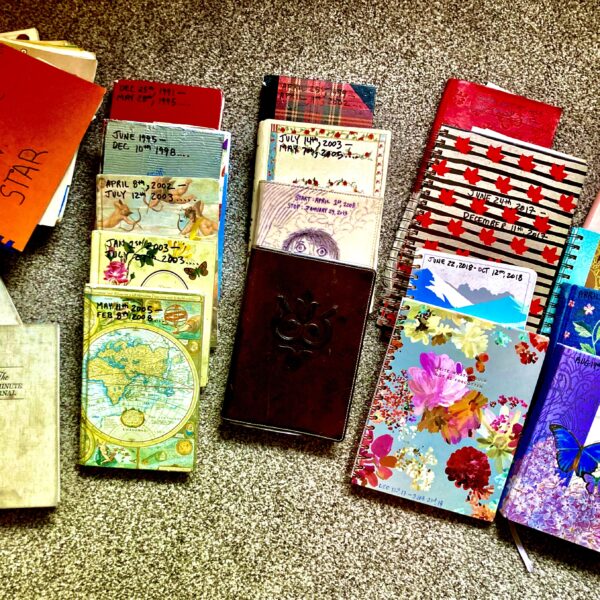 Within this journal will be my most inner workings, intimate thoughts and the pathway to continued sobriety, sorting through emotions and feelings, building confidence, exploration and new discoveries. It’s always exciting starting a new chapter, a new journal, what will come, what will be written, learning new things, finding out new things about life and myself. A clean white pallet, like the view today, to paint my life in words and create a picture. Where I am today is far from where I began. You could almost say it’s a different world. Born on this earth to taking flight, what goes up must come down.

Most of my life has been lived on a yo-yo string, up and down, round and round, most often a tangled mess, unraveling twisted knots, learning as I go. Years of mistakes, frustrating moments, walking away, just to return again and try over. With anything well-used, it eventually wears out. I’m reluctant to give something up that’s been with me for most of my life. You grow attached in ways least expected. Memories, emotions, feelings… I clung to the traumas as thought they defined me. I poisoned myself in over-celebrations of my accomplishments and achievements. Denial and avoidance was a game I played well. I wanted all the good yet could never give up the bad. I strived for, and demanded, perfection — unwilling to admit that I had to give up on the old and embrace the new.

Fortunately, by the grace of God, the old was ripped out of my hands. No human power could have taken it otherwise! It was either accept and embrace the new or die. I define myself as a survivor. That yo-yo is long gone. I now have an infinite supply of building blocks, strong, long-lasting and resilient. How I use them and place them is up to me. To say I’ve been to hell and back would be an understatement. I lived a secret life of suicide and despair, hidden behind a smile, yet out of all that tragedy I’ve been given a new life. The new is unfamiliar and terrifying at first: changing your core beliefs, changing your attitudes and actions, switching off the auto pilot and actually taking control, purging weight that’s held you down. Letting go of things you’ve carried around for decades isn’t easy. Yet through this journey, I’ve learned it’s possible. I’ve prayed for the willingness just to be willing, and that’s where it all started.

In order to survive, I’ve had to explore avenues I’d never travelled before. I had to step back into the darkness and face my greatest fears with faith rather than standing under the street lamp with a bottle in my hand. The answer to my freedom was in that darkness and I came to understand that’s where I had to go in order to ever see the light again. In that darkness, I was surprised to find a strength I never knew I possessed. I also discovered other people in there that helped me find my way back to the light. In that black abyss, I found courage. I had to feel in order to find. I had to use faith like I never had before. I had to be led around for a while and learn to trust. In the light of that street lamp, I trusted nothing and no one; under the light, I was hopeless and lonely. The light I had been standing in for all those years was dingy and grey, covered in dust and cobwebs, yet it was still safer there than in that strange, unfamiliar, unending cavern of darkness.

I am forever grateful to the powers that led me in there though. I spent many months and years in that dark place. My eyes had adjusted to the darkness after a few weeks of wandering around aimlessly. When one sense becomes more diminished, others become more alert. Rather than talking all the time, I had to shut my mouth and listen. I couldn’t dull my emotions and feelings with alcohol any more. I started to mature and take responsibility. Eventually, a new light emerged, yellowish-white like sunlight. I slowly walked towards it with some hesitancy, and emerged into a whole new world. I began to see everything and myself in a whole new way. I had a spiritual awakening. I could see colour, where before it was only black and white. I felt lighter than I ever had before — I had left all that garbage I was hauling around back in that darkness.

What a view! Blues and greens, I felt hope again, I saw with different eyes. That old street lamp that I had stood under was a thing of the past and my hell along with it. I defined myself as a pioneer. I ventured over many mountains, valleys and hillsides. I’ve blazed new trails, and conquered and overcome life’s most difficult challenges. I’ve forged new tools and acquired new skills. That darkness no longer defines me, yet helped me discover so much about myself.

I’ve come a long way and have many miles ahead of me. For now, I sit in the shade of a big old oak tree, with the soft green grass below me and the blue sky above me. What’s next and ahead of me, God only knows. The rest will be in the pages to come. For now I’ll rest awhile and enjoy the view.

One Reply to “The Street Lamp”