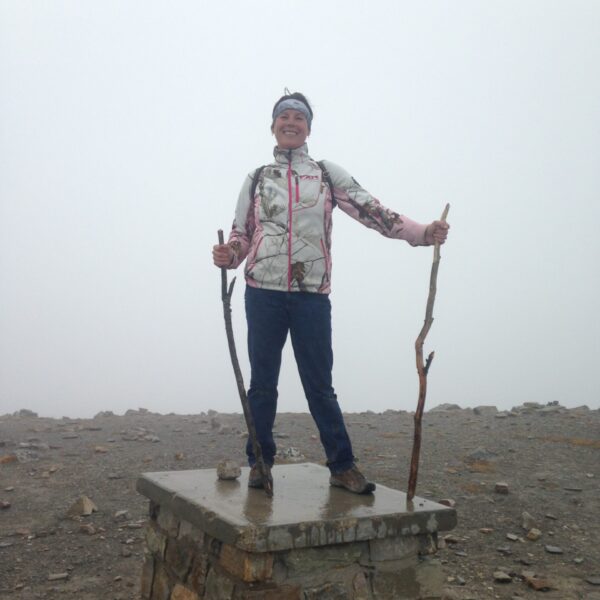 A beautiful sun filled morning, back amongst the wilderness and nature. Yesterday we had a monsoon of rain, creek beds flooded, highways nearly shut down. Waking up this morning to the most vibrant green you have ever seen. Trees and bushes are all blooming, the ice is finally off Lesser Slave Lake. On the front porch in the brilliance of the sunlight, listening to birds and rushing water, I’m in a better place than I ever have been in my life. It’s taken 45 years to get here, but I finally made it. The heartache, tragedy, and death I’ve had to endure to get here has not been an easy feat. I’m proud of the accomplishments I’ve made to get this far, yet one can only remain on the mountain top for so long.

The very peak is called the “Death Zone” for a reason. Lingering there with little to no oxygen, false pride and ego quickly begin to build. Grandiosity is at the peak. Belonging is at the base. The climb is just as dangerous as the decent. There is much more room for humility and kindness in the valleys below. In order to move forward, I’ve learned to come down off the mountains. It’s tempting to remain there, given the effort it took. That euphoric feeling and incredible scenery. You start believing you’re all that and a bag of chips. The altitude messes with your reality… When you’re that high up, you almost feel like God.

Speaking from experience, I was foolish to think that I could just hang out on that peak for as long as I wanted. It was cold and lonely up there, yet it was mine. I couldn’t have been more wrong! Standing tall on that mountain top, so sure of myself, life came along like a hurricane wind; seemingly out of no where, it blew me off the top and sent me tumbling for days till I finally came to a stop. I was bashed: bruised, bleeding, broken and disoriented. It took years to get to the top and only days to fall to the bottom.

It took a long time to get myself back in good enough shape to where I could stand on my own two feet again, then realize and admit the error I had made. I was much too consumed with looking outward and downward on my surroundings — standing on my pedestal, taking all the credit. I have always been the type of person that has to learn things the hard way. In the past it’s taken three, four, five, sometimes six times to get it right. That particular event was so traumatic, I got the point the moment I woke up from that descending fall. I never believed something like that could have happened to me, till it did. After months of healing, all I could see was a vast mountain range surrounding me. Feeling extremely overwhelmed, and with still a lot of healing to go, I felt pretty hopeless at first; I knew I was going to have to climb back up those mountains to get to where I had to go. To my surprise, at the bottom of that valley where I stood, I encountered a village of people who had met the same fate as me.

Most of my life I had gone it alone. Rejecting help because of my skepticism and doubt and lies I had believed. Yet when I found myself amongst that village, all of my old beliefs were smashed. They took me in with unconditional love, despite my horrible condition. They told me stories, and it was the first time I could actually relate to people of my own kind. Whether you think you can or think you can’t, either way you’re right. It took that great fall for me to understand that. I had been believing lies and lying to myself for decades. The kindness, love and acceptance I was given by those people was beyond words. I had never met such an honest, open, vulnerable group of individuals in my travels. That was just enough to help heal most of my wounds

I was far from ready to continue my journey back into those mountains. I thought to myself, “I can’t go through with it.” I wanted to stay in the protection of the group, yet softly and gently they encouraged me to go on. I was provided with a guide, a map, and a specific set of instructions. With great hesitancy I took the first few steps towards a million mile journey. They said I would find a new freedom and a new happiness I had never known before. I was told there were other villages along my route that I would encounter as well. That would give me strength and courage as they did; if I was willing to listen, follow direction, do the work and persevere through difficult times.

It wasn’t long till I came to the end of that valley and the base of my first mountain. Overwhelmed with fear and anxiety, once again my thought was, “I can’t go up there.” It was treacherous and steep and full of unknowns, yet there was a small inner voice calling to me saying, “you can.” My guide had given me some tools, a few coping skills and said she would meet me on the other side. This was a climb I had to do on my own.

You don’t have to be an expert to conquer a mountain, but you do need tenacity, an iron will to put one foot in front of the other, and unwavering faith. I found out quickly that I wasn’t alone on that mountain. God was with me and helped me every step of the way. It was very hard going at first. I did find a few trails, but I also had to make new pathways of my own. Eventually I made it to the top. This time, I only took a quick look around, took a few deep breaths, then headed back down the other side. Thankfully I had a map this time and a set of instructions to help me navigate my way.

I’ve come across many villages and transverse many mountains since that day. I’ve passed on messages: information, experience, strength and hope. The same kind was given to me, and by doing so I’ve found confidence, courage and bravery to keep going. Experience is the best teacher of all. It’s not about how many times you may stumble and fall, it’s about how many times you can pick yourself back up and keep on climbing. It’s also about believing you’re worthy enough to keep going. I eventually found that freedom and happiness, but also so much more! I’ve met so many wonderful people and have found out new and interesting things about myself. I have found peace and serenity. I’m grateful for it all, as I continue to trudge the road to a happy destiny.