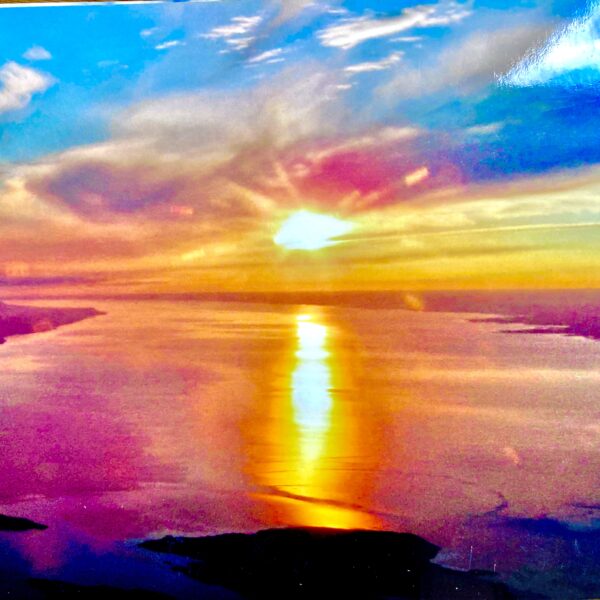 As I sit here on the back step of the house overlooking my small piece of paradise, I wonder how this all will end. I hope my life has a happy ending. Just for today; life is within me, my heart beats, my mind is fairly sound, my health is the best that can be expected and somewhere within me lives hope, faith and happiness. I didn’t have these things a while back. I was always filled with worry, darkness and pain. I haven’t fully gotten rid of the bad, it still lives in the far background of my mind. As long as I continue to work hard everyday, live this new way of life, pray, meditate and keep spirituality fit, keep connected to my higher power, all the crap stays out of the spotlight. I no longer run my own show. I allow God to because life managed on my own became a disaster.

There is a peace and serenity in my life now, I never knew existed. I’ve been letting go of a ton of crap that held me down and in a place of constant turmoil. Letting go is far from easy, at least that’s how it’s been for me. It’s incredibly scary to let go of shit that you’ve held onto for so long, even though it’s weighing you down. I guess in some way I felt like it was all serving some sort of purpose, regardless if it kept me sick or not. I didn’t trust or even believe that what I’d been hanging onto for so long could be replaced with anything good. I’d given up on hope, happiness and faith. For me life proved to be one shit pile after another. The abuse from others and myself was never ending. No matter where I went or what I did, I eventually ended up where I began and always wondered what I was doing wrong, despite my best efforts. If nothing changes, nothing changes.

One tragedy after another, I swore to myself I’d never allow myself to get hurt the way I was again. Yet time after time, history would repeat itself, and each time it did I sank further down into a pit of despair. Constantly blaming others for all my problems, pissed off at God, flipping him the finger, so angry and disappointed at life’s circumstances. I became incapable of dealing with all the pain, so suicide was my last resort. My failed attempts made me feel even more incompetent, and the fear of going to hell and what my family would have to go through somehow kept me alive, but keeping that secret was a living hell.

So how do you go from immense desperation like suicide, to the complete opposite of wanting to live another day? From my experience I had to be stripped down to the very marrow of my bones. I had to be locked away from the booze. I had to be forced to take medication, I was forced to comply in exchange for my freedom. Force definitely came before persuasion.

No one likes to be forced to do anything, especially me, yet that’s what it had to come down to in order for me to be willing enough to change. My life could have had a very sad ending, but the powers that be had different plans for me. I had to be shown the insanity of my thinking, and the way I was living. I was scared straight into the arms of God — I had no other place left to go. What was serving me was wrecking me and I had to be shown that. In a last ditch effort I called out to family and friends to get me out of that institution, no clue at the time that I had been committed for a minimum of 30 days! Now the option of suicide had even been taken away.

It’s been a long and tedious road since then and so much has changed. The first step was admitting my life had become unmanageable, yet who in their right mind wants to admit that! The next step was believing that I could be restored to sanity; believe me when I say I never thought that one possible. The next step after that was making a decision to turn my will and my life over to something other than myself. Admitting I needed help was a tough one to swallow. Believing things would get better seemed impossible and handing over my will and my life to something or someone else was defeating.

For 41 years I fought a battle, and after all that I was eventually defeated. Yet I found a way to survive. One life lost, just to emerge into a new one. All my fight had been completely drained out of me, yet the will to survive was strong. Where that strength came from I do not know, but something gave me just enough to get back on my feet and the courage to face each uncertain day ahead. Wisdom led to courage; courage eventually led to action. Action carried with it willingness, openness and faith. Faith opened the door to acceptance and surrender. Surrender unlocked endless possibilities. All that revealed peace and this thing called serenity.

Fast forward four years and everything has changed. Did I think that change possible in the beginning? Absolutely not! Everything I’ve let go of has claw marks all over it, yet with time I’ve learned to release and relinquish – say goodbye to the old and embrace the new. I often wonder what took me so long to drop those rocks I carried around for so long? Maybe it was my need to control everything around me, yet what I’ve learned up to now is that my story has already been written. I’m not in control, something greater than myself is and I’m just along for the ride.

No human power could have relieved my affliction; too many unexplained events in my lifetime have occurred not to believe greater things are in play. I just choose to call it God, and some very special angels watching over me. When I made myself the center of the universe, my life went for shit. Admitting, believing and handing my will and my life over is a daily practice. The day I stop practicing these things will be the beginning of the end and I’ve only just started to live again. It’s not something I’m willing to risk — if I go back I’ll surely die.

Take my advice, when I say it costs a hell of a lot more to hang onto shit, than it does to let go. I eventually went bankrupt before I learned that. I gave way too many fucks about way too many things and even went into debt for them. I became financially, physically, mentally, and emotionally tapped out. Now I’m learning to spend my “Fuck bucks” wisely, giving a fuck about a lot less shit than I used to. There is a YouTube video about that and it helped me realize where I was going wrong and what to do to manage life a little better.

I’m now 45 and finally on a good path, my regrets are few and my hopes are high. I’m grateful just to have hope back in my life where none existed not that long ago. Am I afraid or fearful to share all of this with you? The vulnerability alone makes my guts do flip flops and summer saults, yet this is the choice I made. To give a little hope, to invoke some belonging, maybe somewhere out there, someone can relate and not feel so alone? I tried to navigate this life alone and got completely lost, and the feeling of being lost is a terror like no other. Perhaps parts of my story will help you find your way? If it wasn’t for others who shared their stories with me, opened themselves up to vulnerability, I’d still be lost.

This is me, just a small version of many stories I have hidden among a pile of journals. It’s all got to start somewhere, so why not now? Someone once told me, “we’re all a little broken” and that’s ok. I’ve lost track of the number of times I’ve had to glue myself back together. I’m a work in progress and always will be.

If you like “Happy Endings”, you just might be in the right place. I have a good feeling that if I keep writing and stay willing to share my story, despite the fear of judgement and self doubt, I just might succeed? God only knows I’ve had enough failures. I don’t rightly know if sharing my journey with you is stupidity or bravery? Either way I’ve got to give it a chance. If I don’t try, I’ll never know, and I’d rather try and fail, then fail in not trying.